Attending FJ’s first ever sports day last Monday was a very special mummy moment and for once we actually had lovely weather. I suppose if anything, it was a bit too hot, but the school were very good about keeping the children hydrated and making sure that they all had sun hats and sun cream so it wasn’t too bad. 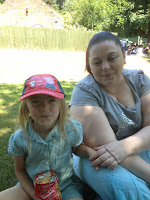 We arrived at the school at lunchtime as we were allowed to join the children in a picnic lunch which was lovely and FJ was so pleased to have her mum and dad at school with her.
After our picnic, the children all went and got changed and then the fun began. They did eight events in teams which were all given a colour and FJ was the green team. 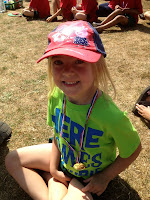 It was so lovely seeing all the excited children complete and at the end, every child received a medal and FJ was super proud of herself for ‘winning’ a medal and has not stopped talking about it ever since! It was a lovely day and I am really glad that I was able to go and enjoy the day with her.
On Thursday I received an e-mail telling me that I have won another competition which is very exciting! I must be lucky at the moment! I have won two tickets to ‘WAGs the musical’ in London and a goody bag worth £60. This was a lovely surprise and I have decided to take my sister with me as hubby is not really a theatre person and it will be nice to spend some time with my sister and have a girls day. The tickets are for Friday, August 23rd and we have decided to make a day of it, so I am really looking forward to going. On Friday night, when the girls got home from school, I gave them their first summer holiday booklet of the year telling them all about the plans for the first week of the holidays. It was so lovely as they were all genuinely excited and FJ was dancing around the living room singing ‘thank you mummy’ over and over again. It really is moments like this that make the extra time planning etc. all worthwhile. I love my children so much and I want to do all that I can to make sure that they have a happy childhood and grow up into happy confident adults that are ready to take on the world.

In other news, LJ has been on work experience this week. She wants to be an English teacher when she leaves school but the school said that there were no work experience placements anywhere for working in a high school which I must admit angered me somewhat, as it is not as if she wanted to get a placement on a TV show or in out of space! Anyway, to cut a long story short, she has ended up being placed in a café with a shop attached to the side of it so she has been working in both the shop and the café this week. She didn’t want to go but I made her go as I believed that it would teach her some valuable life experience as often people do not want to go to work but they have to so that they can pay their bills and when she came home on her first day in tears, I must admit, I felt really bad. She had been through hell that day, working over 5 hours without a break, drink or food, spoken down to and made to do all the horrible jobs that no one else wanted to do. The next day, she begged me to let her stay home but I felt that she needed to give it another chance. I told her that if she gets no breaks again, she should ask for one and if they refused she could walk out and I would tell the school what was going on so that she did not get in trouble. I told her that if everyone gave up after just one bad day that no one would ever do anything or get anything done. She was really not happy with me and I was so worried all day that she was going to come home hating me having suffered for another day. It was one of those decisions on my part that I had really struggled with and I was very uncertain as to if I had done the right thing. She came home that night with a huge smile on her face, telling me that she had really enjoyed her day and that she was actually really glad that she had gone back. I can’t tell you how relieved I was! On Friday, her last day, she was actually sad to be leaving and she has even asked them if they would give her a summer job! It just goes to show that sometimes in life, we as parents have to make hard decisions that can make us look like the bad guy, but if we are doing it with love, things will work out in the end.

One for the freezer