The story of how Prince joined the family is a bit different to our other two dogs. My oldest daughter LJ aged 20 begged me to let her buy a puppy of her own. I wasn’t sure as we were happy with our two boys and I wondered if she would really take care of him like she was promising. However, when she showed me this picture of him, my heart melted and I could not say no.

I was not available when she went to pick him up and in retrospect, I wish that I had gone with her.  The lady she brought him from lived two hours away and brought him outside so that LJ did not get to see inside the home or meet the parents of the puppies.

When we got him home he was riddled with fleas and he could not keep any food inside him as he had terrible diarrhoea. At first, we thought it might be because he was stressed about coming to a new home. Yet after a couple of days, we started to get really worried and took him to the vets. The vet said that it is very likely that he has come from a puppy farm. They said he probably has an infection so they gave us antibiotics and said to bring him back if he doesn’t improve. Luckily he picked right up, but I feel so bad for him having what must have been a horrible start to life.

So, he was supposed to be LJ’s puppy but she was never home and I ended up doing everything for him. Then after a few months, she moved out to live with her boyfriend and left Prince with me so he is now also my dog! 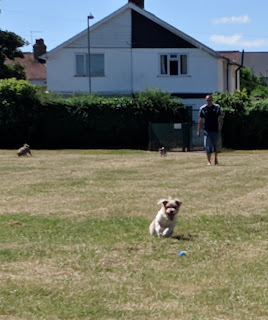 I was really annoyed that LJ had been so irresponsible and broken all of her promises. However, I am madly in love with little Prince so in some ways I’m glad as I would not want to be without him now.

Prince is a Jack Russel cross Shih Tzu which is also known as a jackzu. Prince turned one on July 5th and is a complete ball of energy! He loves to run around and his favourite game is ‘fetch’. He would play fetch all day if I let him as he is constantly bringing me a ball and wanting to play. 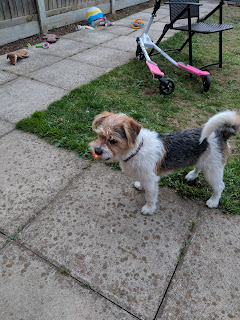 Prince seems much more intelligent than the other two dogs and can ‘sit’, give his ‘paw’ and do a meerkat when I say ‘up’. He is also the only dog who always brings back the ball when playing ‘fetch’ as well. 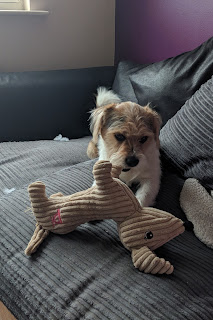 Despite his bad start in life, Prince is a really happy little pup and his tail is always wagging. He is also a very affectionate little boy and loves having his belly rubbed.
Prince has a similar coat to Cody so he does not shed and he also goes to the dog groomers for a cut a few times a year. Prince is good for his baths and he loves being brushed and often tries to push in when he sees me brushing the other boys.

I am very lucky to have Prince in my life as he is a little star and I love him with all my heart. 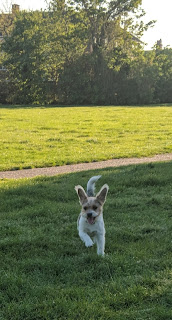